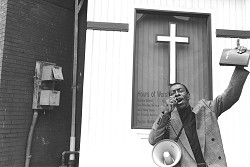 In an age when fundamentalist religion is often tied to terrorism, LET THE CHURCH SAY AMEN offers insight into the role it plays in human society. This documentary creates a very different portrait than the stereotypes of inner-city African-American life often depicted on television - one of dignity, power, and self-determination.

David Petersen has had his films exhibited at numerous international museums and festivals, including The Centre Georges Pompidou in Paris, The Museum of Modern Art in New York, The Hirshhorn Museum, The National Gallery of Art, the Museum of American History, and The Library of Congress. His Academy Award nominated documentary Fine Food, Fine Pastries, Open 6 to 9, received first place prizes in numerous international film festivals and won an Emmy and CINE Golden Eagle award.