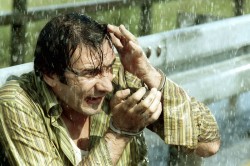 Friday 16th September, just like any other Friday: a doctor wants to kill himself, two policemen make the wrong choice and a suspect thinks he'll never be caught. A woman working in a cake shop, the suspect's wife, knows only how to love, the policemen believe in fate and the doctor who wants to kill himself believes his outcome is inevitable. Only a boy, still to be born, knows the right path. It's the path on which all the characters in the film will meet, a highway built by Fate and the place where she sends them all. At 9 a.m. on 16th September, the doctor, the policemen and the suspect set off along this road, which, for some of them, will prove fatal. By noon, some of the characters have already perished. The policeman escorting the suspect dies and the suspect is left by himself on the deserted highway. He is found by two other God-fearing policemen, who pick him up and drive on. Neither the policemen nor the suspect know that Fate is waiting for them a few kilometers further on and that there their journey will end. Where they exit, the boy will enter and take their place. In a short time, on an empty highway, in just one day, several people's destinies will come together and reach their conclusion. In this comedy about Fate, no one knows what will really happen, but everyone is hoping for a happy ending. Happy endings exist - but do they for the characters in this film?

Born in 1955 in Belgrade. Graduated in B.A Faculty of Dramatic Arts/Film & TV Directing in Belgrade in 1982. In 1986 completed at TV Directing Training Course at NHK Communications Training Institute, Tokyo, Japan. Made his first short "A Boy with The Red Eyes" in 1986. Worked as a screenwriter. Made many commercials, documentaries and stage plays. From 1982-91 worked for TV Belgrade. Received many awards for his shorts, including Cannes Film Festival Jury Prize for "The Sudden and Premature Death of the Colonel K.K" (1987). "Small World" is his first feature.