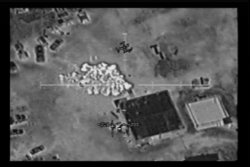 About 2,000 troops from the US led military coalition were engaged in close in combat on March 4, 2002 with small pockets of suspected al Qaeda and Taliban fighters in the rugged terrain of northeastern Afghanistan as part of an operation called Operation Acaconda.... The footage contained in this piece was from part of this mission.

We don't have time to get scared, everything happens in a few seconds. The sight lights up just in front of the windshield, everything is ready for the computer to do its work. It's the computer that has the last word. (Paul Virilio)

Since 1969, Dominic Angerame has made more than 35 films that have been shown and won awards in film festivals around the world. He has also been honored by two Cine Probe Series at the Museum of Modern Art in New York City -- in 1993 and in June 1998. His most recent work Anaconda Targets (2004) is being exhibited at numerous festivals world wide. Dominic Angerame has been the Executive Director of Canyon Cinema for the past twenty years. Under his leadership Canyon Cinema has become one of the world's most renowned distributors of avant garde and experimental films. Canyon Cinema's contribution to the field of experimental/avant garde filmmaking is historic and heroic.