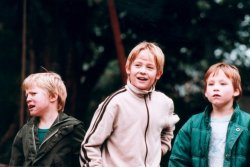 Episode: The Tree Club. The Daltons, a ten-part children's series, is about a family of four boys. The brothers live with their mother and father at Daltonstraat 123. Tim's two older brothers often refuse to let him join in their games. When they set up the tree club, Tim isn't allowed to become a member. So Tim and Gijs-Jan, the boy next door, set up their own club: the Spy Club.

Rita Horst is the director of award winning children's series. She also worked as assistant to the director, producer and director for films and television programs for NOS, IKON, VARA and Veronica-television.