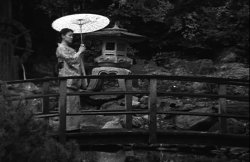 A building inspector brought to investigate a Japanese restaurant becomes embroiled in a blackmail plot by the owner and his wife.

Tom Toro grew up in El Cerrito, California. Raised by an Ohio farm girl and a Hungarian Olympian immigrant, Tom eventually graduated valedictorian from high school and left his home of eighteen years to pursue an education at Yale. There he became captain of the national champion lightweight crew team, as well as editor of the weekly comics page. After finishing college with honors in Film Studies, Tom followed his love of movies to NYU Graduate Film School. Weights and Measures marks Tom's directorial debut at NYU.

Tom Toro & Elizabeth Deters will be available for Q&A after the screening.