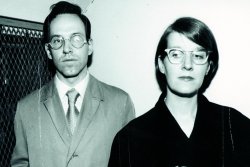 Flypaper is equal parts music video and political history. The Penkava-Cerney scandal of 1949 has been buried in obscurity and VPN's exposing the incident has resulted in political outrage, letter bombs, and confused laughter.

Originally from Norway, Erik Laroi graduated from Columbia University with a BA in Film and Theater. Before working with VPN on Flypaper, he directed music videos for Knocked Out Loaded and Elk City. He is currently working on a music video for the London based group The Clientele.