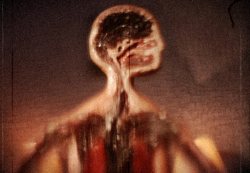 A half of a man has trouble living in society without his organs falling out.

Born in the UAE and raised during his teens in Jordan, Firas Momani consumed all films in their VHS format. He lived and breathed next to his VCR. At the age of 10 Firas began tinkering with his family's video camera shooting, editing, animating and dubbing numerous shorts and experiments. Early in his life he also showed a love for drawing. He went on to study animation at Sheridan College in Canada, combining his love of filmmaking and drawing. Firas graduated in 2004 and has two films under his belt with plans for many others in the near future.