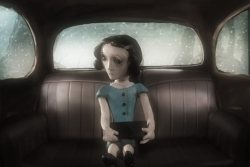 After her parents die in a tragic fire, a young girl is sent to an orphanage where she begins sketching fiery visions. When the head of the orphanage sees her talent, he exploits her art for profit. After he demands more work, the girl unleashes a fire-breathing creation that takes on a life of its own.

Troy Morgan grew up in the small Northern California town of Auburn where an early obsession with fantasy and horror films fed his imagination and darkened the corners of the idyllic landscape with the possibility of menace and monsters. Upon graduation from the San Francisco Art Institute, Troy was soon creating music videos for the likes of American McGee and Chris Vrenna of Nine Inch Nails.