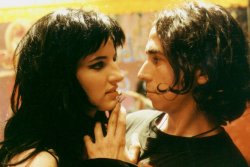 (TOCA PARA ME)
US Premiere

Carlos, the young drummer in a Punk Rock band, receives news of the death of Genaro, his adoptive father. After the burial he travels to Los Angeles, the town of his birth, lost in the midst of the Argentine pampas. But the specter of Genaro doesn¹t leave him until he solves the riddle of his life. Fabiana, a hooker he meets on the road, guides him in the search of his origin despite Dalmiro, a mischievous mechanic who is also her pimp. The town¹s priest appears on scene, triggering an unexpected turn in the story.

Rodrigo Fürth has worked in the film industry since 1981. Following his professional training he began producing advertising spots and features films. He directed commercials and documentaries, was awarded for his film, "Bajo Tierra" (Bahia Brazil Film Festival), and has conducted film and theater workshops in universities and film schools. Among his many projects, Mr. Furth was assistant director of "The Peste, and second assistant director of "Gringo Viejo". Rodrigo Fürth also was Executive Producer for "Flehner Films Argentina" from 1989 to 1992. He presents us now with his opera prima while preparing his next feature film project.