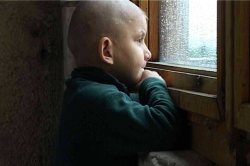 BEFORE FLYING BACK TO THE EARTH

(Pries Parskrendant i Zeme)
US Premiere

A lyric and ascetic documentary essay about children's hospital, about its lessons in strength and love, about possibilities happiness there. How comes life in a hospital ward for children with leukaemia is full of games, joy and chatter? How do these little patients manage to go about their busy lives, when there is but little hope? Having his family experience at the children hospital, Lithuanian filmmaker Arunas Matelis returns to the ward to create a film full of life and magic moments in the face of non-existence.

Arunas Matelis is a representative of the new generation of Lithuanian filmmakers. He studied Mathematics at the Vilnius University, and later graduated from Lithuanian Music Academy, Theatre and TV studies. Since 1990 Arunas has worked as independent director and producer. The first Arunas' doc "Ten Minutes Before the Flight of Icarus" (1990) by film critics was called like film manifest of new generation Lithuanian filmmakers. His following documentary, "Flight over Lithuania or 510 of silence", was awarded "Platinum Film" for best results in sales of DVD and VHS in Lithuania (including mainstream European and USA production). Arunas Matelis has directed 9 short documentaries and one feature ("Before Flying back to the Earth") . Films directed by Arunas Matelis were awarded or screened in many world wide film festivals like: Amsterdam / IDFA; Cannes ("Directors' fortnight" and "Critics' Week"), Rotterdam, Torino, San Paulo , Oberhauzen, Leipzig and others. Since 2006 Matelis is a voting member of European Film Academy.

Director Arunas Matelis will be available for Q&A after the screening.