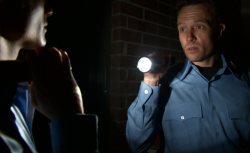 It's 3am in the city of Vancouver. Two cops make a startling discovery when they respond to a report of a disturbance at an elementary school.

Jesse McKeown studied creative writing at the University of British Columbia and went on to write for the CBC television drama "Da Vinci's Inquest." In 2003 he write and directed the short film "The Big Charade" which screened in numerous festivals around the world, and was awarded the short film prize at the Vancouver International Film Festival. He is currently Writer/Executive Story Consultant on the upcoming series "Da Vinci City Hall."

Director Jesse McKeown will be available for Q&A after the screening.