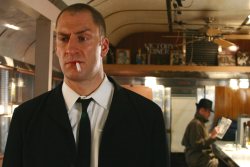 THEY'RE MADE OUT OF MEAT

A strange conversation about an unusual discovery. Based on the award winning short story by writer Terry Bisson. Staring acclaimed NY actor Tom Noonan, and Cash Cab presenter and stand up Ben Bailey.

Stephen O' Regan was born in Sligo, Ireland. After completing a Radio Broadcasting course in Dublin, he studied directing at the New York Film Academy. He considers "They're Made Out Of Meat" to be his first proper film. He wants to make more!.

Director of Photography Paul Niccolls will be available for Q&A after the screening.