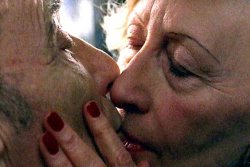 TIME OF THE CHERRIES

A 75 year-old man and woman meet through a small advertising to do a demonstration. But the demonstration will quickly turn into one of their desires.

After a DEA in Sciences of Art at the Sorbonne, Jean-Julien Chervier produced a radio program on FM Aligre. From these meetings was born his first scenario "Julie is in love," directed by Vincent Dietschy and performed by Anne Le Ny and François Chattot. Then he directed his first short film, "The Prayer of the student" In 1999, Magouric, he co-wrote and co-directed with Agnès Obadia his first feature film, "Du Poil sous les roses," a comedy about the sexual awakening of two teenagers. In 2004, "Play Film," a film he wrote and directed as part of the collection "10 minutes to rebuild the World" launched by Canal +. He is currently writing a screenplay for feature film, "The white grass."

Mahmoud Chokrollahi will be available for Q&A after the screening.