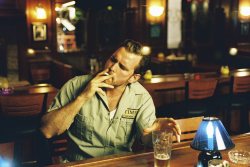 Henry Chinaski (Dillon) considers himself a writer, and on occasion writes. Mostly he quests for the booze and women that sidetrack and seduce, rather than inspire greatness. When he falls for Jan (Taylor), the soulful connection fails to save either from their self-destructive ways, and the relationship totters between earnest connection and reflective loathing. With exceptional performances that capture the intoxicated journey though life and art, Factotum is the story of a man living on the edge; a writer who risks everything, tries anything, and finds poetry in life's pleasure and pain. Based on the book by Charles Bukowski.

Director, writer and producer Bent Hamer's last feature film Kitchen Stories as well as his first feature Eggs premiered at the Directors' Fortnight in Cannes. His films went on to win numerous awards around the world, including the International Film Critics Prize (FIPRESCI) twice and the European Distribution Award for Kitchen Stories in Cannes 2003