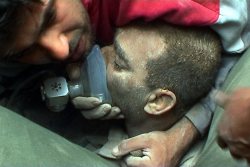 IN THE SHADOW OF THE PALMS: IRAQ

As the world is engulfed in a storm of propaganda, we capture a very different reality in Iraq. We document how life really is for the society and people living under twelve years of sanctions and the Saddam regime. When the inevitability of the US-led conflict increased and people across the globe protested against this highly controversial war, we recorded the changes in the lives of the Iraqi people by focusing on a cross-section of individuals representative of the broader Iraqi community. We follow these individuals as they prepare for the coalition war against them, continuing to tell their stories as they became the target for tens of thousands of coalition cruise missiles and guided bombs. Living and filming with ordinary Iraqis, we observed first hand the devastating effects of the extensive bombing campaign on the lives of civilians. This documentary gives the viewer an intimate, character-based insight into Iraqi society, devolving as the war takes the "cradle of civilization" towards what is increasing being considered "year zero". Ipso-facto Productions spent months in Baghdad, filming during an exceptional period in World history. We managed to capture what has been labeled a "unique and exclusive insight" into the people and situation in Iraq, before, during and "after" the war.

Wayne Coles-Janess is an Internationally Award winning Producer, Writer and Director of Documentaries and Drama programs. His documentary, Bougainville - "Our Island, Our Fight" has won numerous awards including: Best Documentary, Best Video production and Audience Awards. Wayne has worked as Producer - Director for some of the highest rating programs on Australian television. ABC's Flagship program - Foreign Correspondent, SBS's 13 part series - front up, and The Movie Show . Internationally, he has supplied programming for the BBC, Channel 4, CBC, NHK and the American Broadcasting Corporation. His drama, "On the Border of Hopetown" received an AFI ( Australian Film Institute) Nomination. It screened at over 30 International Film Festivals. Coles-Janess holds three Post Graduate Awards in Media Studies (Hons), Visual and Performing Arts (Hons) and Education. He is a graduate from the Film School at the Queensland College of Art.