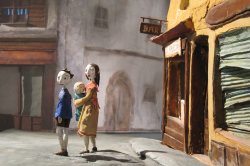 (A L'Epoque)
US Premiere

Rare it must be that Germans came to take refuge in France after the Liberation. It is the case of my father. His nightmare: that someone discovers his nationality...

Nadine Buss geared her steps towards image and film taking a two years course in cinematography at the Crear-Ceris in 1992. After experiences behind the camera on documentary films, she worked as assistant lighting director on TV shows. Though it is only when she met the world of animation that she really satisfied her desire for film image and for fiction. "Hilltop Hospital", "L' odeur du chien mouillé" : series and short film, her work as Director of photography is mainly set in model animation. Nadine decided to direct and light her first film: "À l'époque" because it is a personal story to her. Naturally, she chose model animation to express this story.