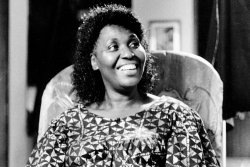 I WAS BORN A BLACK WOMAN

Benedita da Silva, shanty-dweller, domestic worker, mother, organizer, poet, Senator. I Was Born A Black Woman is a documentary based on the remarkable life of the first Afro-Brazilian woman to be elected to Brazil's senate. Benedita da Silva was born to poverty, started working at age seven and gradually gained stature for herself and her community through education, faith in God and community organizing. Filled with Afro-Brazilian music, poetry and dance, I Was Born A Black Woman weaves a dynamic tale of black Brazil and one woman's victory over racism. "I live in a country of 30 million impoverished people, people who can't read or write, people who live in cardboard shacks in the shantytowns, under bridges, on the streets. I know their stories because I have lived it myself." Benedita da Silva

Maria Luisa Mendonça's filmography includes Indonesia, One Struggle, One Change and Raiz Forte. She directs Justicia Global in Brazil. Vicente Franco has worked on many films concerning social issues and Latin Americans. They include The Fight In The Fields: Cesar Chavez And The Farmworkers Struggle, Cuba Va and Freedom On My Mind, for which he was nominated for an Academy Award.