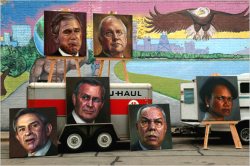 In October 2004, artist Anthony Wilson traveled across the United States publicly displaying six paintings of Bush Administration figures. "A New American Century" documents the journey, the reactions to and dialogue created by the paintings throughout the two-week road-trip.

Sam Hollenshead and Anthony Wilson are cousins who grew up in Ann Arbor, MI and both moved to New York City in 2001.
Anthony Wilson exhibited paintings from his series, "A New American Century", in three group shows in New York City in 2003. In 2004 the entire series opened in August at "The Theatre for the New City". He lives in Brooklyn, NY where he continues to paint while working as a carpenter.
Sam Hollenshead worked as a photographer from 2001-2003 documenting union labor throughout NYC. In 2004 his photographs of the rebuilding of subway infrastructure at the World Trade Center site were exhibited at the Museum of the City of New York. He has worked as a laborer on tugboats in New York harbor since January 2004.

Directors Anthony Wilson & Sam Hollenshead will be available for Q&A after the screening.