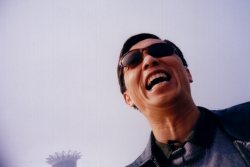 A poorly translated love letter from China to America that thanks us for all the business.

Jon Daniel Ligon: Many years a writer, Mr. Ligon received his MFA in experimental writing from Brown University where he studied under such notables as Robert Coover, Edmund White, John Hawkes and others. Seeing film's potential, he began experimenting with it as a writer's medium. His early works "A Fly By Shooting" (Sundance) and "One of Those Days" (Sundance) led him to later successes such as "The Real Adventures of GI Joe" and most recently "Ha Ha Ha America" a film intended to be read not watched. Like most writers, Mr. Ligon works alone: no crews, no editors, no external opinions.