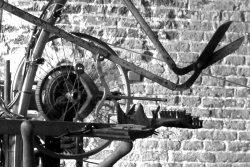 Combining live action, stop-frame animation and a kinetic sculpture, HARRACHOV explores the effect of an arcane force that, like a black hole or immensely powerful electromagnet, exerts a far-reaching and irresistible power upon certain objects and materials, willfully seducing, centralizing and internalizing them. Caught up in this seemingly unstoppable process of amalgamation, we feel for these powerless entities and identify with the inevitability of their plight. Extraordinarily, the beast the film creates actually exists, beyond the confines of the screen, as an impressive, fully-functional kinetic sculpture - THE HARRACHOV EXCHANGE - designed & constructed by Guy Bishop.

Matt Hulse: Fine Art at the University of Reading and Electronic Imaging at Duncan of Jordanstone College, Dundee. His practice crosses boundaries between film, animation, installation and audio art. He is the founder / curator of the Audible Picture Show.
Joost van Veen: Studied Audio Visual Arts at the Academy of Fine Art in Tilburg and Film and TV Science at the University of Amsterdam. In 2000 he established, with Esther Urlus, De Filmwerkplaats, an independent film workshop which is involved in a wide variety of projects including FACES, a film/music performance with composer Huib Emmer. His films have been seen at festivals around the world and include: Yavas Yavas, Stadsgeest and Steen. His short "Interlude" won a Tiger Cub Award at the Rotterdam International Film Festival 2005.