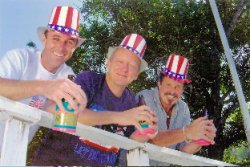 A 12-year-old boy's home video ruins his parents marriage, sends his father to jail, and solves a murder mystery. Shot completely from the boy's POV.

Andrew Traister was born in Brooklyn. He received an NEA FELLOWSHIP GRANT and has directed at The Old Globe Theatre in San Diego, Geva in Rochester, The Pasadena Playhouse, and many other theaters around the U.S. NICKY'S BIRTHDAY CAMERA is the first film he's directed.

Writer/Producer/Actor John Walcutt, Director Andrew J. Traister and Actress/Producer Sheri Hellard will be available for Q&A after the screening.