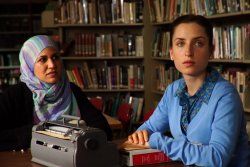 Two young women - one an Orthodox Jew, the other Muslim - meet and become friends as first-year teachers at a public school in Brooklyn. Over the course of the year they learn they share much in common, not least of which is that they are both going through arranged marriages.

Stefan Schaefer and Diane Crespo are founders of Cicala Filmworks, and have worked together in theater and film for over ten years. In that time they have written, directed and produced award-winning one-act plays, music videos, documentary films and narrative features. ARRANGED is their debut feature working as a directing/producing team. They are longtime Brooklyn residents.

Directors Stefan Schaefer & Diane Crespo will be available for Q&A after the screening along with many of the supporting cast and crew.