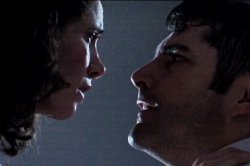 Kip Polyard (Robert Gomes) suffers from obsessive-compulsive disorder and hasn't left his Manhattan apartment in 10 months. When the beautiful Celine (Leslie Kendall) moves in next door, Kip is compelled to finally open his door ... to romance. But when Celine's ex-boyfriend Andy (Frank Deal) shows up, Kip realizes he's let in more than he bargained for, as Andy's jealousy -- and Celine's dangerous secrets -- threaten to dismantle Kip's carefully-ordered world.

Kerry Douglas Dye and Jordan Hoffman met at NYU film school in the early nineties. Their first feature, Ultrachrist!, a satirical comedy, was released on DVD on 2004. In 2006 the pair began production on Body/Antibody. Mr. Dye based his script on his own struggles with obsessive-compulsive disorder, although he maintains that the bloodier parts of the film are entirely fiction. Dye and Hoffman's influences include Polanski, Bollywood, Cronenberg and Billy Wilder.

Filmmakers Kerry Douglas Dye & Jordan Hoffman will be available for Q&A after the screening.