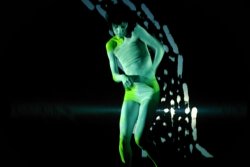 Envy aims to explore the collaboration between a musician, a dancer and an animator. It is an exploration into how each discipline can express the same concept in different ways, so that in combination they rise above what each could accomplish on its own. They are all orchestrated to work together.

After graduating from Art Center College of Design In Los Angeles, Jasmin Jodry worked as a designer and animator in Hollywood for Imaginary Forces as well as in New York for Trollbäck and Company. Her work concentrated mainly on title sequence design including "Spiderman" and "Monsoon Wedding". Since 2003 she has freelanced in London for companies such as Intro, UVA, Imagination and The Light Surgeons including work for Elton John, Joss Stone and Zero7. In 2006 she completed her masters degree at the Royal College of Art. She is now working as a director focusing on music videos and audio/visual performances. Her last two music videos for Kode 9 have been featured in numerous festivals and fine art galleries.