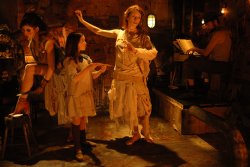 A girl born and raised in a leaky junk submarine finds an image of a cloud and becomes determined to find out if clouds exist.

Maia was born in Paris to Czechoslovakian parents who later migrated to Australia, where she performed in film and theatre as a child. Maia gained film industry experience by working on Universal and Miramax Productions in Prague and LA and has studied film making internationally. She completed degrees at FAMU, the National Film School in Prague (the youngest successful applicant), The Royal Art Academy in Copenhagen, and has a Masters in Film Directing at the Australian Film Television and Radio School; where she was awarded the 2006 Gilbert and Tobin Award for the 'most significant and promising body of work'. At the age of 26 she had completed three degrees, directed over ten short films as well as a TV series pilot and TV commercials. Her short films have had international success, screening at over twenty film festivals around the world including prestigious festivals such as Cannes, Sydney, Milan, Palm Springs, Bermuda, Park City, and HATCHfest. She is currently developing a feature film and has been signed as a director by the esteemed production company Pod Film Sydney.