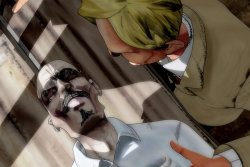 A father is murdered in a Sicilian cottage. Who is the murderer? A "moral will" explores the risks of a father-son relationship and leads to the revelation of the mystery.

Born in Palermo on January 27, 1967. Antonio Giambanco holds a degree in classical studies from Palermo University. Since his childhood he has been interested in cinema and directing and he produced some short films that were selected in major national festivals. In 1995 he began working with IM*MEDIA rapidly rising to become director of multimedia with responsibility for the artistic direction of all projects produced by the company. Some of the most remarkable projects are the novels of "Commissario Montalbano", interactive 2D cartoons, that won the New Media Prize Bologna and received a Nomination at the Europrix Salzburg. Antonio is, at present, partner of the company. His unique style of digital communication has become the standard model within the company.

Antonio Giambanco and Emilio Pursumal will be available for Q&A after screening.