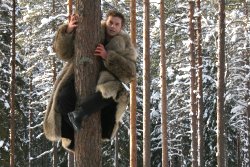 Woodsmen is a film about the collision between man and nature. It is a tale about two woodsmen who encounter a wolf-like creature in a beautiful forest. The woodsmen are doing their everyday job, felling trees and piling up logs, but is there something more in the forest?

Timo Korhonen (b. 1954) is film director and producer. He has a special interest in social issues and cultures of resistance. Since 2002 Korhonen has worked as the producer for a large documentary project The Other Finland.

Director Timo Korhonen will be available for Q&A after the screenings.