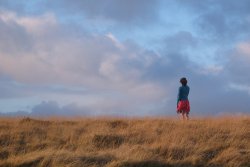 Hard Told is a journey of suffocating intimacy and isolation. Through the eyes of an elderly deaf man, a dance emerges. Bare feet...a muddy field...a distant tree...a woman. Taking pedestrian movement through barren landscapes, Jane Mason's film searches for boundaries of time and space, guided by her protagonist's deviating narrative.

Jane Mason is a dancer, choreographer and director based in Devon. She studied Dramatic Arts at Bretton Hall in the early nineties before becoming a founding member of the Random Dance Company. She has been creating work for live performance since 1996 including work for the BBC, the Royal Court, Box Clever Theatre Company and Quarantine. In 2003, she made her first film, "Andout," in collaboration with Duncan Sim which has been screened extensively at home and abroad. In 2004, she was chosen by the BBC to participate in Dance Film Academy, a broadcast residency that allowed her to develop her second dance film, "To Go To."