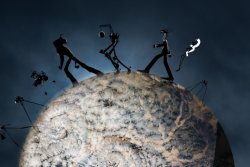 A character walks the Earth, calling on its strange inhabitants to leave the wasted planet and follow him to a new world.

Brendan Cook graduated with honours in 1997 from The College of Fine Arts UNSW. From there, he began working as a web designer and animator for new media pioneers GoManGo before moving into Broadcast Design and animation at award-winning industry leaders GMD. While building his professional design and animation career Brendan also developed an interest and talent for filmmaking, completing 2 short films which have screened internationally and received awards in numerous film festivals. In 2002 Brendan created the Sydney based design and animation studio pictureDRIFT, providing excellence in creative services within the film and television industry. Brendan has also continued developing as a filmmaker through many music video projects for artists including Gotye - Hearts a Mess, the Cops - Dirty little Rebel, and Paul Mac and Smog - Rock bottom Riser which have screened in over 15 international film festivals throughout 40 countries.