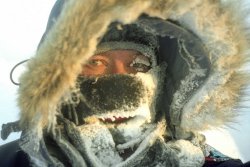 Crossing the Arctic, leaving one shore of the ocean and joining up with the other, 100 days later, 2000 km farther... This is the story of the couple who walked back to the North Pole, returning from 99 days of skiing and swimming through the Arctic Ocean. She's the head of a big publishing company and the mother of two young children; he's a filmmaker specializing in documentaries shot in the wildest places on earth. Their dream: the longest, coldest and hardest of polar expeditions. The dream of a couple who met at the North Pole two years ago. The dream of a couple who wants to push their limits even further to extend this trip both on the ice and inside themselves in a world of silence and icy hollowness.

"When I saw through the plane window how much the Arctic was melting, I could feel how closed we have been from a disaster. We were alive but the Arctic Ocean was dying."