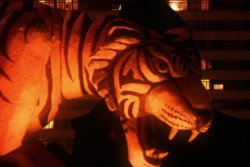 A giant tiger mysteriously appears in a big city, revealing the hidden reality in an otherwise ordinary night.

Guilherme Marcondes was born in São Paulo, Brazil. Guilherme started working as an illustrator when he was still in Architecture school. In 2000 he went to the Brazilian animation studio Lobo where he worked for five years for clients such as Diesel, Cartoon Network, and Nickelodeon. After that, Guilherme spent some time in London directing the build-up campaign for the Europe Music Awards 2005 for MTV Networks before returning to São Paulo to work as a freelancer. Guilherme is currently working at Motion Theory in California and directing short films.

Tyger is inspired by William Blake's poem of same name.