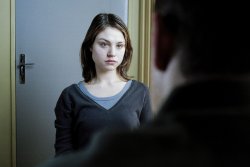 Charlotte is a sound engineer whose mother is murdered in her house in the countryside. Once in the village, Charlotte realizes that she doesn't know much about her mother's life there. The official investigation isn't going anywhere, and the place seems full of secrets. Charlotte decides to take action. She uses her sound equipment to carry out her own investigation. While listening to a recording just made in the house where the murder took place, Charlotte discovers a strange phenomenon : sounds from the past blend in with sounds from the present.

Alanté Kavaïté began her career as the lead actress in Raimundas Banionis' "JAZZ", a Lithuanian feature film (1992). She then decided to pursue her studies in France, graduating from Avignon's National Fine Arts School before entering Paris' Beaux Arts School where she specialised in photography and video. After graduating, Alanté Kavaïté has been making corporate films as well as movie trailers. She worked with Pavel Lounguine as an editor on two documentaries and as script supervisor on a TV drama. She then worked as an editor on a few documentaries before co-directing with Daniel Leconte "Boris Yeltsin, childhood of a leader" (2001), a 60' documentary broadcast on the German-French channel Arte. In 2002, she directed her first short film "The Carp", selected for various film festivals and broadcast on the French channel Ciné-Cinéma. She now devotes herself to feature films, of which FISSURES is her first.