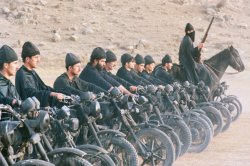 HAVE YOU ANOTHER APPLE?

In an unidentified, atemporal dystopia, a despot rules with an iron fist. Helping him to maintain control over the people are Dasdaran - black-clad warriors who are never without their scythes. As in any fantasy, a hero will rise from within the masses to deliver it from bondage. The problem here is that the hero is a loser: overweight, bald, clumsy, and interested solely in his next meal. The requisite partner hates him, too. The allegorical comedy from Iranian filmmaker Fazli is brilliantly surreal in its attack on religion and in its deflation of myth making.