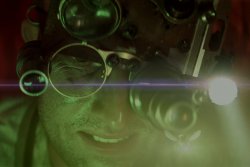 Struggling young writer Finkle is so hampered by his inability to create he will go to any length in his search for inspiration. His dream draws closer when a mysterious salesman called Swallows sells him a suitcase full of ideas. These ideas are actually the living incarnation of the word in the form of microscopic mites. It is these mites that ultimately guide him to a mysterious orifice living in his ceiling, through which he must enter in order to end his torment...

Director Barney Clay & Producer Claire Neate James will be available for Q&A after the screening.