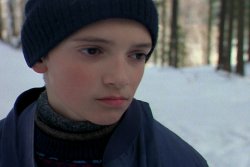 A man tries to reconcile a harrowing tale from his past and confront old questions that will keep on haunting him forever. But what will it mean for the present?

Already having earned a Master Degree in International Private Law in 2000, the Romanian Bogdan George Apetri moved to the US to follow his dream of becoming a filmmaker. He graduated in 2006 from the prestigious Columbia University in New York with a Master of Fine Arts degree both in Film Directing and Cinematography. He has directed a series of short films that were selected by many festivals across the world and garnered several awards and recognition in the process, culminating with being nominated for the Student Academy Awards. He is currently working on a book adaptation that will form the basis for his feature film debut.

Director Bogdan George Apetri will be available for Q&A after the screening.