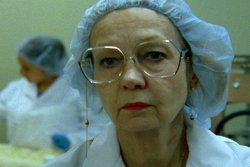 What if happiness was for sale? One evening, after work, Iwona buys a box of happiness in a strange discount store and has to decide what to do with it. A straight-faced comedy with Polish-american screen legend Elzbieta Czyzewska shot in Boston and New York City.

Born in France, Sophie Barthes grew up in the Middle East and South America. A Columbia University graduate, Sophie co-directed the short film SNOWBLINK with cinematographer Andrij Parekh and a Unicef documentary in Yemen on women literacy programs. Her short film HAPPINESS played at Sundance and in more than forty film festivals. Both HAPPINESS and COLD SOULS, her feature-length screenplay, won the NYSCA Individual Artists Grants and the Showtime Tony Cox Award for Best Screenplay at the Nantucket Film Festival. Sophie completed her residency at the Nantucket Screenwriters Colony and the Sundance Screenwriters Lab. She was admitted to the Sundance Directors Lab with COLD SOULS.