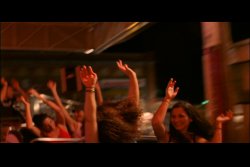 Airplanes is the story of two teenage girls who secretly hook up one day at a traveling carnival. Although their encounter is brief, like an airplane it's bound by gravity, and doomed to return to earth.

Jen Heck has worked as an editor, director, writer, and producer for clients including Winton/duPont Films, VH1, Bravo, TechTV, and Charged Animation. Her films have been featured at the Whitney Biennial and the Museum of Modern Art, and at festivals including Frameline, Sundance, Sao Paulo, Hamptons, Palm Springs, and more. Her newest film, "Airplanes," is the winner of the 2007 PlanetOut Short Movie Award. Jen is currently a student in Columbia University's Graduate Film Program.

Director Jen Heck will be available for Q&A after the screening.