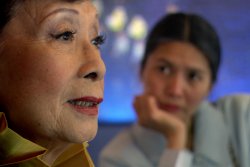 Madam Fang, Mrs Nguyen and Sister Ah Lan appear to have little more in common than unfulfilled dreams. Yet together they're tempted to leave their everyday behind for a surprising night at "Fortune City" Casino. Here they meet Craig, a disillusioned young croupier, and in the following mayhem we glimpse their vulnerabilities, superstitions and hopes.

Heng Tang's debut short drama 'Boy-Serpentine', was selected for competition at the Venice FF. He next honed his directing skills at AFTRS (Australian Film Television & Radio School) in 2000, making his second film 'The Other Son'. In 2002 he was granted an auteur in-residence scholarship at La Residence du Festival Cannes. The Last Chip presented an exciting new film making genre for Heng and his first opportunity to bring to life a strong dialogue driven story.