Latest News: Director Marie-France Collard will be available for Q&A after the screenings. 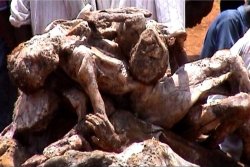 RWANDA. THROUGH US, HUMANITY...

Filmed in Rwanda in April 2004, during performances of the show Rwanda 94, in the context of the 10th commemoration of the genocide of the Tutsis and the massacre of Hutu moderates. How can theatre question reality when faced with the primary actors of the story told on stage? The intense, cathartic, active answer of the Rwandan audience brings to the fore the current concerns of the survivors. What is life like for them 10 years after the genocide? Echoing the issues in the play, "Rwanda. Through us humanity..." allows the survivors of the genocide to speak out, in their current reality, during this special period of mourning. The memory of the genocide is sought out, is established through the traumatic awakenings, the evocations, the disinterment and dignified burial of victims, the fears and worries with regard to the threats that still weigh upon them today. They express their profound resentment of us for having abandoned them, and of the international community for their silent complicity during the genocide, but also of the exclusion, discriminations and violence to which they are still submitted.

Marie-France Colard is a self-taught filmmaker. She has made several documentaries for the RTBF (Belgium) and also engaged documentary about the society. Since 1990, she has been a member of the Groupov, an artists' collective whose work is directed towards theatrical practice. She's the coauthor of the plays "Trash (A lonely orayer)," "Rwanda 94," and "Anathème." She also made films for theater and performances.

Director Marie-France Collard will be available for Q&A after the screening.