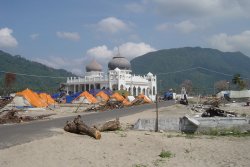 Lampuuk was close to the December earthquake epicentre. The village was flattened. Just one building - the Mosque - was left standing. Out of 7,000 people only 1,000 survived. The film focuses on these survivors as they attempt to rebuild their lives and community. Ruhi Hamid, working alone, spent several weeks living with them. There were constant earthquakes, no infrastructure, and food and living conditions were basic. Ruhi says "my motivation was to tell their incredible stories of courage, resilience and hope in rebuilding their lives."

Ruhi Hamid is a filmmaker whose films are informative journeys into the world of people and their cultures. Ruhi was born in Mwanza, Tanzania to Asian parents and attended London's Royal College of Art. She joined the BBC's pioneering community programmes unit where she worked on the BAFTA award winning series 'Video Diaries.' The plight of the Hmong people who have been trapped for 30 years in the jungle of Laos is close to Ruhi's heart. Ruhi filmed the first ever footage of the plight of the Hmong and she has gone on to campaign on their behalf at the UN, the US State Department, Congress and at the EU Rights Commission in Brussels. Often shooting alone at great personal risk, Ruhi has worked on a range of films that make a real impact, and 2005 was no exception. She began in Banda Aceh, Indonesia making a one hour documentary, 'At the Epicentre' for BBC TV. Filming for six months in post Tsunami Aceh, Ruhi shared the hazardous living conditions of the people she was filming. For this film Ruhi received the Rory Peck Award 2005. In September of 2006 Ruhi travelled to New Orleans to cover the aftermath of Hurricane Katrina. She also travelled to Pakistan and gave her free time to produce and direct a pop video campaigning for greater awareness of people with HIV/AIDS in rural India. Ruhi ended 2005 filming in Afghanistan, risking her life making three films on the progress of women's lives for the newly launched Al Jazeera International Television Network. In 2006 her projects have included filming with refugees in Northern Uganda and farmers in China, and a film on child slavery for the BBC. She is currently working on a film on Sharia Law in Nigeria.