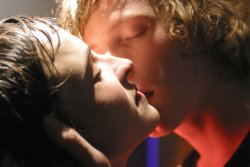 Nadja utterly storms through life, without compromise. She is looking for the true moments in life: in her pictures during the day as a photography student and at night in her favorite club, dancing herself into ecstasy with hefty flirts and quick sex. When she meets Darius, she is only interested in a one-night stand. But sex with Darius opens her eyes to a deeper, more meaningful existence for which she is willing to give up everything else. A desperate fight between love and passion begins in which Nadja dives headfirst and which threatens to overwhelm Darius...

Felicitas Korn (Germany, 1974) studied at the Academy of Television & Film in Munich. Auftauchen is her feature film debut.