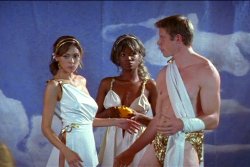 Sarah Schenck received her B.A. in Art History from Bryn Mawr College and her M.A. in Political Economy from Stanford University. As a writer/director/producer, her short films have won prizes in the U.K. and Belgium. In 2004, Sarah was nominated for an Independent Spirit Award for producing "Virgin," a $65,000 feature directed by Deborah Kampmeier, starring Robin Wright Penn and Elisabeth Moss. Before she became a filmmaker, Sarah has worked as the New York City Comptroller's Senior Advisor for Education; for The New York Times in Rio; as a product testing guinea pig for Procter & Gamble in Paris; as a fellow at the Metropolitan Museum of Art lecturing on fifteenth century Flemish painting; and caring for patients in Mother Theresa's hospitals in Calcutta. Sarah teaches filmmaking at Hunter College and advises in film studies at the New School. "Slippery Slope" is Sarah's first feature film as a writer/director (2006). She has written three other feature screenplays.

Director Sarah Schenck will be available for Q&A after the screenings along with cast & crew.