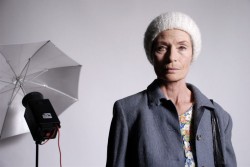 Liselotte is an aged actress. She hasn't been on stage for a while and is now trying to earn a living with it again. She is auditioning for different advertisement castings and third-class theater roles, without any success. Her only hope remains an old friend Vera, to whom she has not spoken to for years.

Carolina Hellsgard, born 1977 in Stockholm. After finishing her studies in film history at the Stockholm University, she attended the experimental film program at The Berlin University of Arts. "Karaoke" which she wrote and directed is her graduation film.