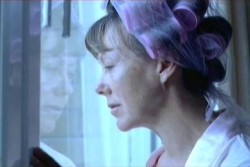 Simon is a new tenant who likes to go out. He lives in an apartment below Mrs Henley who likes to read, watch TV but mostly stay in. Simon arrives back in his old car at 5am, playing hip hop and allowing the door of his flat to bang shut. Mrs Henley and her quiet neighbors are upset, feeling Simon to be not only inconsiderate but also not their 'sort'. Simon knows this well and also knows his movements are being closely monitored. One morning, Simon and all his neighbors meet via their intercom.

Mark's latest short Assessment was funded by Film London and described as "excellent" and "the most ambitious" script they'd had that year. Winner of the jury prize at Film London Best of Boroughs Awards at BAFTA, it premiered at 54th BFI London Film Festival and then screened at London Short Film Festival in January 2011. It has been selected by the British Council for 2011. Born in south Manchester, Mark Gutteridge studied fine art and sociology before his first employment in the film industry as an operations assistant at Ealing Film Studios, London. He then gained on-set experience as an assistant director before moving into directing. Mark worked with Bafta and Emmy award winning actress Jenny Agutter for Intercom and 2007 Oscar nominated cinematographer Dick Pope who said it was, "the best short script and the only one I've ever wanted to be involved with". Intercom went on to win five international awards as well as official selections at Brooklyn, Palm Springs, Short Shorts Tokyo, Molodist and Foyle international film festivals. Intercom is now being developed as a feature with BFI/Northern Film and Media, producer Jack Tarling and exec producer Emma Hayter (Ladies in Lavender, My Summer of Love).