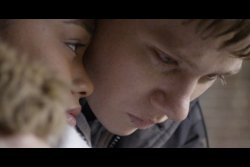 Rachel's developing adolescent shape is of concern to her tutors at a top London ballet school. Michael, a boy at a local urban school, is struggling with his exams. Their chance encounter leads Michael on a mission into a Royal park that takes him where adult analysis is all that counts.

Mark's latest short Assessment was funded by Film London and described as "excellent" and "the most ambitious" script they'd had that year. Winner of the jury prize at Film London Best of Boroughs Awards at BAFTA, it premiered at 54th BFI London Film Festival and then screened at London Short Film Festival in January 2011. It has been selected by the British Council for 2011. Born in south Manchester, Mark Gutteridge studied fine art and sociology before his first employment in the film industry as an operations assistant at Ealing Film Studios, London. He then gained on-set experience as an assistant director before moving into directing. Mark worked with Bafta and Emmy award winning actress Jenny Agutter for Intercom and 2007 Oscar nominated cinematographer Dick Pope who said it was, "the best short script and the only one I've ever wanted to be involved with". Intercom went on to win five international awards as well as official selections at Brooklyn, Palm Springs, Short Shorts Tokyo, Molodist and Foyle international film festivals. Intercom is now being developed as a feature with BFI/Northern Film and Media, producer Jack Tarling and exec producer Emma Hayter (Ladies in Lavender, My Summer of Love).

I'm interested in the space between dreams and real life. Story is key for me and short film is such a special medium to tell it. There are no easy answers to any questions I pose but the answers always come from life.