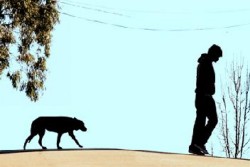 A lifelong bond between a teenage boy and his dog is coming to an end. Bottled up, the boy's grief becomes a wall that sits between him and the people he loves. Staying strong can be hard, especially when you're losing your best friend.

After graduating from a Bachelor of Laws and Arts majoring in Film in 1998, Amy Gebhardt has become an award winning filmmaker in both drama and documentary. In 2007 she graduated from her Masters in Directing at the Australian Film Television and Radio School.