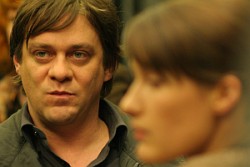 A department store security guard is secretly in love with a clerk in the store's bookshop. When he witnesses a seeming rival being attacked in the train, he gets off instead of helping him. Not being able to deal with his bad conscience, his formerly controlled life breaks down.

Reto Caffi was born 1971 in Zürich. Reto Studied English literature and journalism at the university of Fribourg, Switzerland. He has worked as film journalist for print, radio and for Swiss National Television SFTV. His short films have won over 30 awards at festivals and were shown in cinemas and on television.