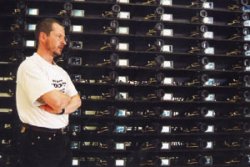 Lars von Trier's Dancer In The Dark was awarded the Palme d'Or at Cannes 2000, while Björk was awarded Best Actress. Trier filmed a single dance scene using 100 cameras, hence the title of this film about the filming of the double winner at Cannes, and about the pain that may well be a condition for producing great art.

Graduated in cinematography at The Polish Film School. Katia Forbert Petersen has made 60 feature and documentary films and worked as a cinematographer for German ZDF and the Canadian Film Board. Received the Danish Association of Cinematographers Annual Award 1992. Special Award for Best Camerawork at the ITVA-festival in Copenhagen in 1997 and 1999. International Award for Best Photography at the ITVA-festival in New Orleans 1998.