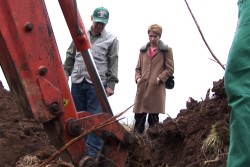 In 1995, during official negotiations inside a UN protected area in Zepa, the Bosnian Serb Army abducted Colonel Avdo Palic, the Bosnia and Herzegovina Army negotiator. As of then began the long search by his wife, Esma, for her missing husband.

Alen Drljevic was born in Sarajevo. In 1999 Alen enrolled at the Academy of Performing Arts in Sarajevo, with a major in directing. His graduation project, the short film PRVA PLATA (PAYCHECK), was nominated for a European Film Academy Award (EFA).