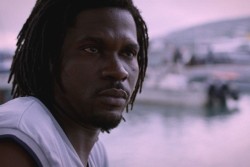 PANMAN, RHYTHM OF THE PALMS

"Panmans" tells the story of the rise and fall of the steel drum pan player Harry Daniel. Harry is an icon of the Caribbean whose personal life suffers when he places his music above his family, for he is desperate to pass the pan culture to a younger generation. During this crusade to keep the music alive on his beloved island of St. Martin he meets the exceptionally talented Jacko who becomes his star apprentice and hope for the future. Harry treats him like the son he never had, but when Harry's fame begins to diminish, Jacko turns against him and embraces instead the world of electronic based music. When Harry dies unexpectedly, Jacko returns to his island culture to become pan music's brilliant new icon.

Sander Burger is a talented young Dutch director credited with the films "Oliver etc," "Koen," "Ons Waterloo" and now "Panman, Rhythm of the Palms." He is a graduate of the Dutch Film Academy and is very interested in presenting films of the third world, especially the Caribbean. "Panman" is his biggest film to date.

Actor Ian Valz will be available for Q&A after the screening.